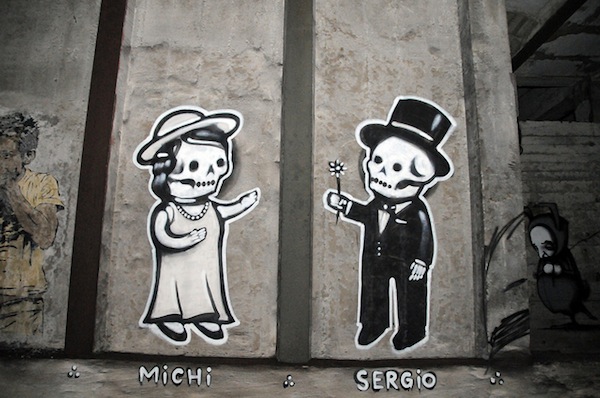 From the Underbelly Project: Its been over a year since news of The Underbelly broke but we felt the time was right to resurface

After taking time to reflect on The Underbelly Project, we felt it was important to share what it was like in the abandoned subway station. To show the work being created, to show the life that was happening on the dust lined tracks. To do this we will be holding an exhibition during Art Basel Miami. For this exhibition, time lapse videos will be shown of each artist creating their work, a video walkthrough of the station will show the entire station right after the work was completed, and photo documentation will help illuminate how the artists created their work . Unique artifacts from the abandoned station will give viewers insight into the process. It is our hope that this show will help convey what it was like in our dark corner of the world for that brief time.

In addition to the documentation of the project, we thought it was important to showcase new works created by artists from The Underbelly, outside of the physical limitations of the tunnel. To showcase work that was created in favorable conditions without the fear of being arrested or discovered. For this a sampling of the painters, sculptures and installation artists from the tunnel were chosen to represent the variety of talents that left their mark in this abandoned subway station

Although we have been silent, it doesn’t mean we haven’t been busy. For those of you who would like to stay updated, you can follow us on Twitter – www.twitter.com/UnderbellyArt Or you can stay subscribed to this mailer for future email updates. (More news is coming over the next 2 weeks)

8 November- After a full year underground, The Underbelly Project is resurfacing this December in Miami during Art Basel. Presented in its own pop up gallery from 1 December – 5 December, the show will feature original artwork from many of the 103 international artists that participated in the hidden subway project. This exhibition will highlight the essence of the abandoned New York City station known as the Underbelly.

Workhorse has stated: “The New York Underbelly was an important chapter for us, but the story hadn’t been comprehensively told. The Underbelly Miami show gives us a chance to present the broad scope of documentation – Videos, photos, time-lapses and first hand accounts. The project is about more than just artwork. This show gives us a chance to show the people and the environment behind the artwork“

PAC has stated: “While the experience each artist had in their expedition underground can never be captured, it is my hope that this show will highlight some of the trials and tribulations associated with urban art taking place in the remote corners of our cities. Too often the practice of making art in unconventional venues remains shrouded in mystery and I hope this exhibition will shine a faint light on those artists who risk their safety to find alternative ways to create and be a part of the cities they live in.”

Fashioned to simulate the rawness of the abandoned station four stories beneath the bustle of New York City, the exhibit will attempt to capture the experience of artists’ that were invited leave their creative mark four stories beneath the city streets. The show will feature video footage of artists at work, still documentation, as well as recorded sounds heard in the tunnel.

Exclusively at The Underbelly Show, the unreleased We Own the Night: The Art of The Underbelly Project book, will be available as a limited edition collectors boxed set before the public release in February. This boxed set will include a hard cover book along with 9 unreleased photos packaged in a hand crafted oak box engraved with the names of each artist that contributed to the project. Before the general viewing there will also be a book signing featuring many of the aforementioned artists.

The gallery will be located at 2200 Collins Avenue, South Beach in Miami, FL.

In 2009 PAC and Workhorse started a project in an abandoned subway station in New York City. Over the course of a year and a half they invited over 100 contemporary artists to leave their creative mark inside the station. Working illegally, the project worked towards documenting a cross section of contemporary art, free of the commercial restrictions of the traditional gallery environment. Once the project had come to and end, the entrance was sealed trapping the art inside and creating an ephemeral time capsule. The project received praise internationally, including a front-page article from The New York Times.