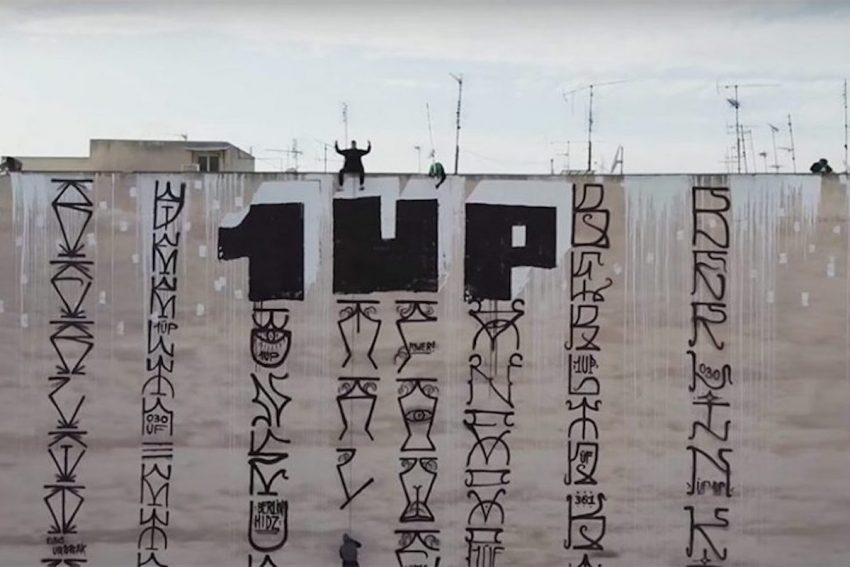 A movement, an accumulation of styles, a powerful public display of creativity or a social critique, Urban Art can be regarded from many different angles.

Those who delve more into the theory of art can surely recognize manifold connections Urban Art has with various avant-garde and postmodern art movements of the 20th century, but we sadly must admit that for the most, it may only stand for all those pretty or interesting pictures on the outside city walls. Although the visual element is certainly its strongest aspect, Urban Art usually more than a picture or a tag.

Urban Art designs usually carry a potent message connected to the environment they are placed in related to either social, economic or cultural circumstances. Exactly these messages are the essence of the engaging images. They are manifestations of the artists’ original ideas, created through a unique process that connects contemplation, creativity, and action, that is sometimes deliberately illegal. This creative process says tons about artworks produced, it’s inevitable and an effective Urban Art piece cannot be imagined without this type of conceptual background.

As an amalgamation of different ideas, techniques, and methods, Urban Art is particularly colored by the fact that it’s executed in the public domain. Often without permission, such acts or interventions emerge as a special type of performance, usually conducted without an audience, although the audience is well aware of the activities preceding a painting or an installation.

The audience is also the factor that both connects and makes the difference between performance and Urban Art since its role is as equally important, but it’s involved in a different way. Similarly to influential performance artworks, many of the Street and Urban Art actions are video documented, and those that are not, still contain an extensive preparation necessary to make a piece, from location scouting to creation and installation of a piece.

If we accept that the performative element is inherent to Urban Art, it’s hard not to wonder about its importance within the discourse.

WHAT IS PERFORMANCE ART AND HOW IT CONNECTS WITH URBAN ART

Challenge of traditional artistic conventions has always been one of the core ideas of performance art. Called “actions” by Joseph Beuys, performances often borrowed methods or tools from other art forms or from non-artistic areas like everyday tasks, work or ceremonial practices.

Described as “live art”, performance is both avant-garde and ephemeral, it usually carries a powerful social and political message, while historically it has been connected with different anarchic or radical cultural movements, from Dada to feminism. Still, performance art has always kept its immaterial nature and that is what separates it from any other art.

Similarly to performance art, Urban Art is essentially defiant. Looking back to the very beginnings of Graffiti-style writing and train bombing, we find a desire to be seen, to participate in society in a unique way and most importantly – a purposeful engagement with the audience.

This aim to interact with the public is one of the crucial connections between Urban Art, Street Art, Graffiti and performance, although the process and the contact are conducted in a completely different manner. One of the main differences is also the fact that Urban Art always leaves a material trace behind.

There is also a conceptual connection between Urban Art and performance, because both of the practices are very political. When we look at the history of performance art, we can find countless analyses of the human condition viewed through a particular societal or theoretical prism. Urban Art can be just as political, dealing with local or global issues from another angle, from basic rebellion against the system to more complex ideas such as French Situationism.

When we compare the two ways of expression, we can find distinctive performative qualities in the creative process of any street artist. It’s process-based art, where the process is woven deeply into the meaning of the final work.

One of the biggest differences between Urban Art and performance is the matter of artist’s identity. While in performances we know who the artist is, moreover – they voluntarily share details about their lives with the public, in the streets we are only left with a moniker. The majority of creatives performing in the street remains anonymous because of the following issue.

Another characteristic that separates performance art from Urban Art is the legality of the process. Performances are usually done legally, in institutions, with all the necessary permits. Even the early, controversial performances (such as the legendary Cut Piece by Yoko Ono from 1964) were conducted so that both the artist and the audience are aware of the consequences. In Urban Art, the legal is somewhat tricky. Since the first public tags, Graffiti or paste-ups, this type of art was more often than not considered vandalism, which made it completely illegal.

Over time, many artists accepted this illicit nature of their practice as a given, building on its rebellious nature. Urban Art performance is, therefore, a “live” element of socially engaged art, in which the importance of public audience is shown once the piece is complete and the message is out. What makes this performative constituent critical is the knowledge that someone has conducted a work without authorization successfully. This recognition of the artist’s courage and dedication can be as inspirational as the final piece. Sometimes even more.

Historically, Berlin has always been the center of both Urban Art and performance art. Throughout the 80s and 90s, a number of visual artists performed illegally on the city’s streets, in front of the Wall in West Berlin before the reunification, and in Mitte and Prenzlauer Berg around Kunsthaus Tacheles after 1990.

The defiant spirit was very much alive around the that historical turning point, while Graffiti writers were taking huge risks by painting on the Berlin Wall, around S-Bahn rails, on trains and rooftops. This local tradition can be found today in the performative actions of Berlin Kidz and 1UP crew, two collectives fearless in their dedication to Graffiti art and the city.

Thinking about the performative nature of Urban Art gives another dimension to art spotting during city walks. Knowing local laws might make the entire experience all the more exciting since illegal art is not treated the same way everywhere in the world. In Berlin, Graffiti and Street Art is generally not frowned upon, unless it becomes dangerous. This is what makes the German capital one of the best places to see Urban with substance.

When it comes to extreme performance, the Berlin Kidz collective leads the way. Their work does not only involve graffiti writing or installations in impossible places, their work involves elaborate stunts such as repelling, train roof riding on bikes, or trespassing. Considered hazardous, they have been chased by the police multiple times, but never caught.

Their style is drawn from the Brazilian pixação graffiti painting practice, usually found on tall, abandoned buildings of São Paolo. By some, this bombing manner is not even considered art, although the Berlin Kidz elaborate their cryptic expression beyond the written message. Their goal is to fight the system by “sticking it to the man”, while their art points out to some of the most burning political questions related to Berlin’s urban environment.

Right beside Berlin Kidz, there is the united 1UP crew, a group of graffiti artists who keep bombing the city by climbing rooftops and trains since 2003, escaping the scene James Bond style. They are known to work even in broad daylight, spray painting together and completing huge throw-ups in minutes. They treated the Berlin U-Bahn for the last New Year’s Eve with a tag painted at midnight in under 5 minutes! Since we cannot discuss the execution of their speed-painted work, the performance marks the key factor in activities of the 1UP crew.

Kripoe, a former member of the famed CBS crew (put to sleep in 2005), is responsible for one of the most famous images sprayed in Berlin. He is the author of the notorious yellow fists, painted often in pairs in completely unexpected places. Interpreted as a symbol of rebellion and anarchy resistance, these fists raise another question of how the artist got to the particular location, in which painting often seems utterly impossible.

Active since 2000, Rocco und seine Brüder collective has been installing their work around Berlin drawing attention to various social and political issues the city faces. One of their first installations from 2016, “Secret Bedroom Discovered” raised a number of questions about the homeless and the refugee crisis while attracting a lot of media attention. As their art remains conceptual, its performative quality emerges as an important factor, especially given the elaborate nature of their work.

In 2017, the collective’s project called “In God we trust” called drew a lot of attention, being tweeted even by the official Berlin Police. Rocco und seine Brüder installed a prayer bench in front of ATM machine in an U-Bahn station, thus creating an altar from the money machine, while posing universal question about capitalism and the relationship of man, money and morals.

Recent activities of the TOY Crew are also founded in social criticism, putting the focus on justice and equality. When the city did wrong to the weakest social groups, the homeless for example, this crew showed up and bombed the place with items such as chairs chained down for them to rest on. The city had previously removed the benches hoping to resolve the problem of homeless in U-Bahn stations that way

One Street artist using paste-ups has been active in Berlin since 1995. It’s SP38, an artist who adopted the city as his own, while he keeps spreading anti-capitalist, sarcastic and critical slogans through his recognizable lettering/typography and posters. Sharp and gentle at the same time, his words invite us to Escape the reality or to fight the status quo, referring to the matters of economic and social crisis or gentrification.

Placed in gentrified or future gentrified areas, his work “Erased” is a direct allusion to the vanishing of authentic spots in Berlin. His performance is contained within his persistence of pasting messages (changing with the context of time) for the Berliners for more than 20 years.

Argentinian artist settled in Berlin, Alaniz, has become known for his paintings conducted with a telescopic brush or a roller. He focuses on what is humane in his subjects, giving life to marginalized characters from society. The process he perfected over the years results in impressive images, emphasizing the importance of his action. Moreover, all of his works are rather large in scale, requiring a lot of time and effort to be completed, a sportive artistic performance, while his topics range from questioning of art to highlighting the ongoing refugee crisis.

Active since 1996, SOZI36 is certainly the favorite social activist of Kreuzberg. Decorating furniture, mattresses and other objects with witty text, SOZI36 disperses a strong political message, criticizing very local issues, global politics, and raising voice against capitalism and imperialism. His tags and installations are mostly found in Kreuzberg, although he works wherever he goes to communicate through messages with the public.

And as another Berlin’s creative who executed the latest elaborate stencils directly on walls, we have Tape and Street Artist, OSTAP, who creates figurative acrylic works that take several days to be completed. These monumental pieces are mostly sarcastic and pointi out political issues or comment the change of Berlin in the last years, especially his work “Noah’s Berlin Ark” from 2014 that was transformed into “Titanic” in 2017.

Mentioning some of the most prominent urban artists creating in Berlin today, the presence and the importance of the performative component becomes even more apparent. What sets Urban Art/Street performance apart as an expression in its own right is not only the action, it’s the political message it carries, which is always disobedient, audacious, directed against the capitalist system, and most importantly – locally relevant.