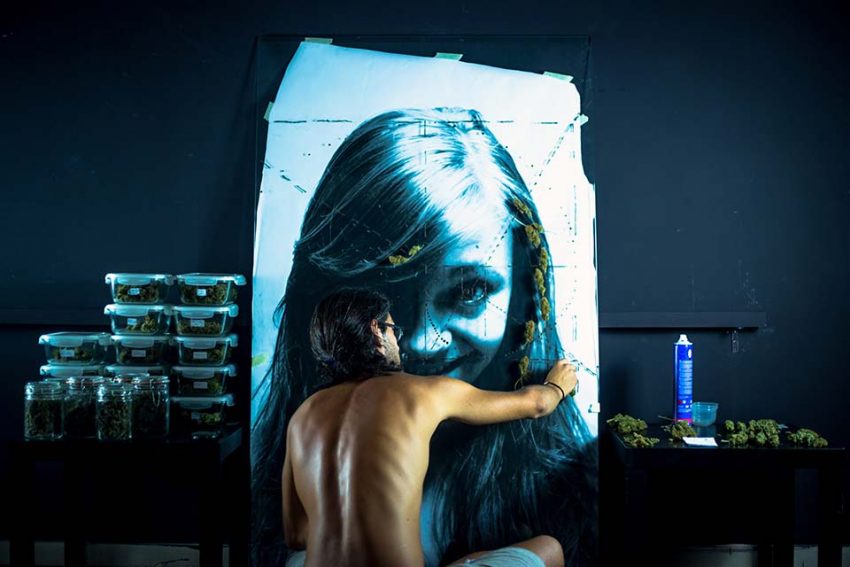 Sea162 became in the last month of September the first Spanish artist who has ever created cannabis art. To develop the entitled artwork “Cannabis Lupus” he used 70 grams of weed, 70 grams of hash and another extra 100 grams to produce canna-oil. This graffiti artist from Madrid has just created a new form of art. Interesting, huh?

To offer you a bit of information about him, Sea started painting graffiti at the age of 14. He has always been experimenting with different types of decoration and it’s been recently when his creativity took him to a new form of expression: cannArt.

Read carefully as we will now tell you insider information of how this Spanish artist creates his art and where does he receive inspiration from. Check it out!

When we asked Sea162 about the price of developing this artwork, he answered that it is not the value that it actually has, but the relationship and connection that exists between Marijuana and art; and the sacred value of a plant that could have medicinal properties.

The first time that he created cannabis art, Mr. Sea used natural materials worth more than one thousand Euros. Second time, he travelled to Morocco where some locals around Bab Berred gave him free stuff to create artwork at their home (some sort of old-school exchange). Last time, Sea used 70 grams of hash, 70 grams raw-weed and another extra 100 grams of marijuana to elaborate  Cannabis oil.

“Where I live at the moment, any person could seed their own plants in the countryside, and you just need water and sun”, Sea162 added.

Is there anything illegal on the cannabis art industry?

At a moment when left wing political parties like Podemos are opening debate whether legalizing marijuana in Spainor not, Sea162 observes his artwork as pure creativity. “You cannot actually smoke anything from it”, concluded this Madrileño artist. These canvases debate and reflect about the prohibition that exists over the use and consume of the plant.

These cannabis art compositions were created at several locations where it is legal to possess cannabis related products & materials. Their goal is completely different to making a statement justifying the use of Marijuana. It’s in those private spaces where is legal to grow your own plants. They are just art.

Does the cannabis art use any specific type of weed?

No, it doesn’t. Sea162 works with the materials that his art merchants/ gallerists provide with. He works on commission based and you will soon find his artwork available at Street Art Gallery Spain. “It doesn’t exist any kind of requirements to work with cannabis. All products are good to work on the development of modern art”, Murillo stated.

When it comes to how to develop cannabis art, the Spanish artist has different techniques. “Working  with marijuana and its derivatives is a continuous job. It’s best to play: stick it, model it…”, he admitted.

“It’s just a matter of trying and making errors. The more you practice, the more you will learn. I enjoy the development of art much more now than what I use to do in the past. I would like to travel to Canada and the United States. Imagine how advanced people are in Canada that they just legalized the use of recreational marijuana in the whole country”. Whow!

What’s the connection between cannabis art with graffiti and street art?

According to Sea162, both artistic ways can be found in the streets and he just contextualizes them in a natural environment where it’s nicer to enjoy them.