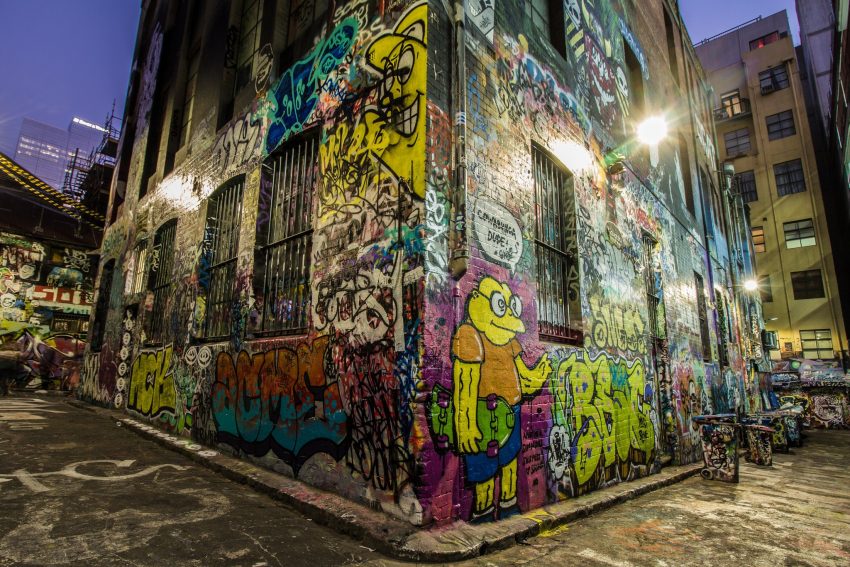 After three graffiti artists were killed by a train, our writer speaks to veterans of the scene – and enters a clandestine world of kings, tags, throw-ups and toys.

We sometimes stand on station platforms,” a young graffiti artist tells me. “When a train comes in on the opposite side, we jump on the tracks and start painting the train in front of the bemused passengers. One time someone shouted, ‘Train!’ – meaning there was one coming down the line. Everyone jumped back onto the platform except me and another guy. We looked at each other, daring each other to break first. I won but the train came insanely close to hitting me. It had its horns blaring.”

The death this month of three London graffiti artists has raised many questions, in particular this one: why would young men risk their lives to write their names in prominent places? The bodies of Jack Gilbert, 23, Harrison Scott-Hood, 23, and Alberto Carrasco, 19 – known by the tags Kbag, Lover and Trip – were found on the tracks at Loughborough Junction. They are thought to have been struck by a train during the night. It was, say police, a particularly risky location, offering no refuge and no means of escape.

Graffiti artists are often thought to be motivated by two things: the egotistical pleasure of leaving behind their nom de guerre or tag, and the excitement of doing something dangerous and illegal. But this view is seen as “monolithic” by Rafael Schacter, an anthropologist at University College London, who has spent 10 years researching graffiti and written three books on the subject.

He says that – although there are risks of electrocution, being chased by the transport police, or falling from high ledges – it is rare for graffiti artists to die in the way these men did. He believes that neither egotism nor risk-taking are their chief motivations. What matters to graffiti artists – also known as “writers” – are the social rewards that ensue from being part of a subculture.

The modern graffiti scene, linked to hip-hop, was born in the early 1970s. It really took off in 1971 when the New York Times wrote about a Greek writer called Taki who was leaving his name and street number on the ice-cream trucks and trains of Manhattan. TAKI 183 became widely imitated: suddenly there was a competition to see who could become more famous, to see who could “get up” the most.

At first, “getting up” – or achieving graffiti fame – was all about the number of tags, but soon tags started being written in ornate “hand styles”, which evolved into simple graffiti pieces called “throw-ups”. These were names filled in with one colour, often chrome, then outlined in another. Later tags were elaborated into full-colour “pieces” complete with cartoon characters.

Initially, the number of tags or throw-ups a writer produced was the sole criterion for judging who were “kings” and who were amateurs or “toys”. But style and clean technique became increasingly important. Writers may gain respect if they have enough tags but, to be a fully developed writer, you have to master all the graffiti forms.

If pieces hold more kudos than tags, then pieces in highly visible locations, from busy transit routes to exposed rooftops, hold still more. Pieces on trains – especially whole trains – are seen as the pinnacle of getting up. This is why graffiti artists prize such locations as Loughborough Junction, whose track feeds into central London, meaning their work will be more visible both to other writers and to the public.

Today, writers can air their graffiti globally using social media and specialist websites. In the real world, meanwhile, there are also many graffiti spaces or “halls of fame” that are either legal or tolerated by the authorities. So why do writers continue to take risks, illegally painting trains and tracksides, to get their work seen? The reason is not just that locations such as Loughborough Junction offer great visibility. It’s because writers are still expected to write much of the graffiti under illegal conditions.

In his 1982 book Getting Up: Subway Graffiti in New York, Craig Castleman says that only by writing graffiti under challenging conditions can the writer demonstrate “grace under pressure”. As one 25-year-old writer who wished to remain anonymous told me: “When you get people painting in a calm legal space for the public, you end up with clean art – without any of the hardcore soul you get when you’re painting in the pitch black with an eye over your shoulder.

Some academics view the egotistical self-expression, illegality and risk less as primary attractions than as a means to develop feelings of identity and belonging. Nancy Macdonald, author of The Graffiti Subculture, homed in on the role of gender. Pointing to the fact that writers are predominantly male, she said graffiti was chiefly about forming male identity – becoming “someone” through familiar tropes, such as the outlaw.

Rafael Schacter, author of award-winning World Atlas of Street Art and Graffiti, believes Macdonald gave too much prominence to masculinity. Although graffiti is overwhelmingly a male activity, he says, artists are less concerned with masculinity than to encounter, engage with and explore the city. He thinks the obvious gender bias simply echoes divisions in wider society. “Girls,” he says, “are not ‘supposed’ to explore dangerous places, to engage in extreme activities, to stay out late, whilst boys for the most part are.”

There are female artists in graffiti, says Schacter, but they often arrive at a later age. They’re no less daring, he adds, pointing to the example of one female writer, Gold Peg, whose graffiti occupied the highest spots at King’s Cross in London. Duel, another female writer now in her 30s, once climbed out of the window of a moving train to tag its roof. Schacter sees the willingness to take risks as “intrinsic – but as a way to show commitment to a community. These are not the lone, disaffected youths often depicted, but individuals totally committed to their collective and practice.”