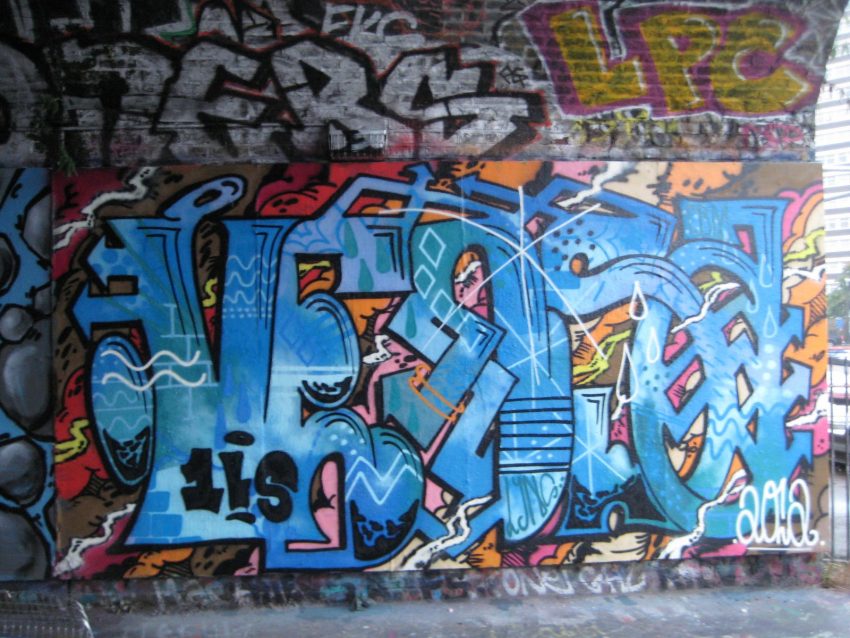 When Magda Brenner was looking for a unique way to celebrate her birthday last year, she came across Miami’s Best Graffiti Guide in Wynwood and decided it was the perfect idea.

“I was looking for something different to do,” recalls the Miami attorney.A few days later, she and her friends hopped on bright blue Citi Bike® bicycles picked up at one of the several Wynwood docking stations and followed Pedro Amos, the co-founder of Miami’s Best Graffiti Guide, as he zig-zagged through the 20 blocks that comprise this buzz-worthy neighborhood known for its murals, art galleries, and public art displays.“Not only did he know about the artists whose work graced the buildings, he also knew the history of the neighborhood,” Brenner says.It turns out Amos was a graffiti artist himself.

“He was painting graffiti in Wynwood since the early ’90s when it was still illegal,” says fellow artist Ryan the Wheelbarrow, Amos’ business partner. “I arrived in 2003 and fell in love with this area, but to Pedro, this is home.”It’s hard to believe this now vibrant neighborhood teeming with percolating cafes, bars and creative tech companies was once a deteriorating destination. Like a lot of Miamians, Brenner had no idea that the colorful, artsy neighborhood used to be a garment district, hence the high volume of warehouses that served as calling cards to graffiti artists in the 1980s and ’90s. To them, the buildings were giant, brilliant, empty canvases.

Today renowned street artists such as New York’s Kenny Scharf and Germany’s Case paint everything from cartoon-like characters to photorealism, respectively. “The breadth of art that exists — I had no idea that people come from all over the world to paint here,” Brenner says.Art & SoulWhile you can certainly explore Wynwood on foot, the Citi Bike program allows you to cover more ground, says Wheelbarrow, who adds that most of their graffiti tours last about 90 minutes. “Otherwise some people never go far beyond Wynwood Walls.”An always-changing street art exhibit that blankets more than 80,000 square feet of outdoor wall space on NW 26 Street between NW 2nd and 3rd avenues, Wynwood Walls is Wynwood’s epicenter.

Conceived by Goldman Properties and featuring the work of dozens of artists from around the world, you can spend an entire day gazing at the intricacies of the designs, attempting to decipher their hidden meanings – or you can join a tour and let Wheelbarrow and Amos tell you everything they know.“We don’t just take you to the murals, we tell you who commissioned it, what country the artist is from – in many cases we witnessed these murals being created,” says Wheelbarrow, underscoring that theirs is the only artist-owned-and-operated tour company in Wynwood. “We allow for a lot of Q&A so people can really get to know the heart and soul of what’s made Wynwood such a hotbed for art.”
It’s also not unusual to come upon artists doing their thing.

“My favorite part of our tour was when we approached a famous street artist named Chor Boogie and we listened to his interpretation of the mural he was working on,” Brenner says. The acclaimed street artist is one of the most recognized in the world, so the chance encounter turned out to be a highlight.

“Unlike being at an art gallery looking at an old painting, this was live art, which was very moving,” Brenner says.Flattered at the attention, Chor Boogie took time to explain the details of his work, such as the fact that the eyes on the mural belonged to his deceased mother. That depth of experience and understanding is hard to find in the urban art world, where most artists fly under the radar.
“We treat the neighborhood like a gallery.”Urban RenaissanceWhile many cities denounce graffiti and try to cover it almost as quickly as it goes up, Wynwood has embraced it – as have the locals. Hence, this living museum of rotating street art is credited with giving birth to the neighborhood’s renaissance over the past decade. ‘There are murals that have been up for years and no one has vandalized them,” Wheelbarrow says. “That’s a testament to how beloved they are. The city has discovered a new appreciation for graffiti as art.” So much so, in fact, that building owners no longer need a permit to commission art for exterior walls.Additional tour highlights include the old RC Cola plant, which is always in flux thanks to its enormous visibility from I-95. Artists love to paint it; over the years Miami legends Primary Flight, David “Lebo” Lebatard and Crook & Chrome have all tagged it. (Tagging is the art of adding your signature or moniker.)From former soda factories to the more refined museum quality of the Walls, Wheelbarrow and Amos cover it all on their tour. “We treat the neighborhood like a gallery,” Wheelbarrow says. And since the murals are always changing, no two tours are the same; you’re likely to see and learn something new each time.Beyond the art, the neighborhood has a palpable creative spirit that can be felt in every nook and cranny, whether you’re having lunch at Joey’s, an Italian bistro, enjoying a craft beer at Wynwood Brewing Company, or checking out the galleries.After her tour, Brenner and her friends opted to have her birthday lunch on the patio at Wynwood Kitchen & Bar, where they were literally surrounded by the famous Wynwood Walls. “What’s beautiful is that for the most part, there aren’t national chains here but rather locally owned businesses,” Brenner says.For Miamians as well as visitors to the Magic City, it’s an urban renaissance in their own backyard.

Citi® debit card and credit card holders enjoy 15 percent off, up to $15 annually, with each purchase of a Citi Bike Miami half day, full day, 30 day, or annual membership which provides access to hundreds of docking stations throughout downtown Miami and Miami Beach. Depending on membership level, users enjoy an unlimited number of free 30-minute trips for the duration of their membership or their half/full day rental. Citi debit card and credit card holders also receive a 20 percent discount at the Wynwood Walls gift shop through . Limitations apply.