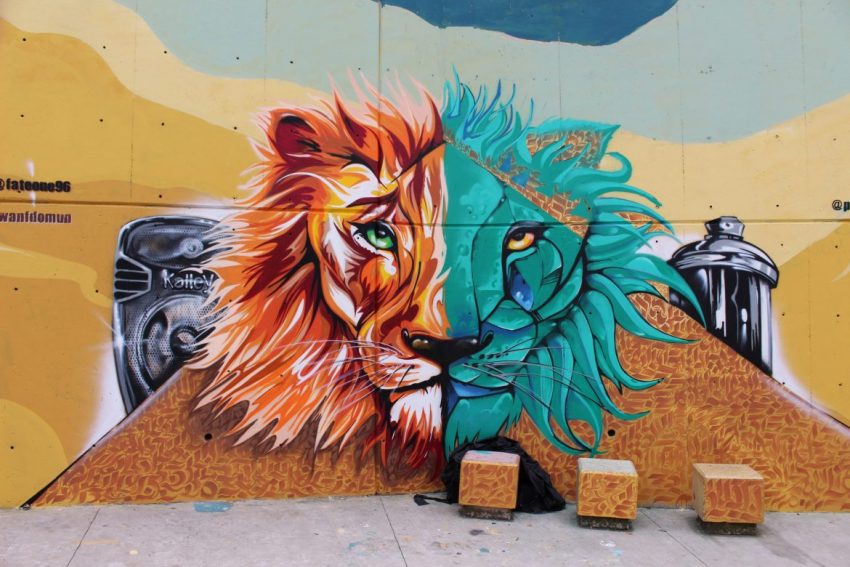 Graffiti writers have tags that they try to get up as much as they can. Graffiti is lettering and based on the concept of having a tag. It is the 50th anniversary of Graffiti this year. Although it can be argued that Foo, an Australian from WWI and Kilroy from WWII were taggers, the actual graffiti movement is credited to being started by Cornbread from Philly in ‘67.

Street art was popularized by gallery writers like Twist AKA Barry McGee (he was heavily influenced by street art in Brazil like that of Os Gemeos) that did paintings of things like a screw that became recognizable or later, stencil artists like Banksy, and due to their popularity in the high brow art world, street art became popular too…

To the common, “traditional” graffiti artist following in the footsteps of the “subway graffiti era”, the word “graffiti” denotes an art which is typically based on stylizing words, having your own nickname (tag) which you put up all over the city. The main focus is on words, style, and on “getting up”, and the main writing implements are spray paint, markers and stickers. Street art is seen, by these “graffiti artists”, as any other form of art which is in the form of vandalism.

Stencil art like Banksy’s and wheatpastes like Swoon’s are typical examples of street art, which is not considered “graffiti”

The main reason there’s such a strong and passionate focus on the segregation between these two types of vandalism is that graffiti artists have an understanding of what it takes to get up, what the stakes are, and that there are certain unspoken rules to maintain respect for these efforts, mainly that one artist does not go over another’s work unless their intent is to start problems with the other, or to retaliate.

Street artists generally don’t know and/or don’t follow this, and tend to put their work over graffiti as if it had no worth in being considered, so graffiti artists take that very personally. It generally takes a lot more time/risk to do graffiti than it does to glue a piece of paper onto a wall, so it is seen as an particularly unfair type of disregard.

Also, street artists have no knowledge of graffiti history, and have a tendency to put their work over really old graffiti (which are considered relics because graffiti is typically removed nowdays) and also go over writers who have passed away.
Of course, in the dictionary, graffiti has a broader meaning.