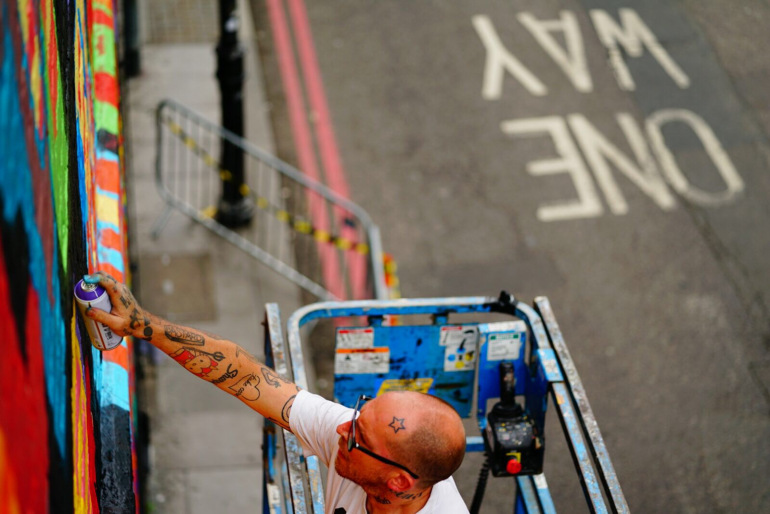 This week Ben Eine paid tribute to the victims of June’s horrible fire at Grenfell Tower with a new mural at the Village Underground in Shoreditch.

The mural takes the emotional words of Ben Okri’s poem “Grenfell Tower, June, 2017” and displays them on the 120 square metres of prominent wall space in East London. Ben Eine’s style is instantly recognisable due to his consistently rising international popularity over the last decade and a distinctive lettering style that covers many of London’s outdoor spaces.

“As a Londoner,” Eine said, “with deep roots in the city’s subculture, I am proud and privileged to be involved in this important and historic initiative.”

“Our hope for this mural, which we’re painting in response to the Grenfell fire, is that it will help keep this discussion alive and bring the victims and survivors out of the shadows so that they can receive justice.

“I’m happy that my skills can try to help make a positive difference after such an awful tragedy.”

Paint the Change, a street art and social justice project, in addition to the Village Underground, are sponsoring the work.

Maziar Bahari, an Iranian-Canadian journalist and filmmaker who has lived in London for over a decade, started Paint the Change to stimulate dialogue around urgent social issues through the arts.

I reported on Dave the Chimp’s work as part of the #notacrime campaign connected to Paint the Change in late 2015 – check that out as part of Kulturcast episode 2.

Speaking about the disaster, Bahari said: “I love London and I’m fucking angry”.

“I love my city with all its history of wars, riots, swinging, resilience and diversity. I love the fact that dozens of nationalities live (mostly) peacefully together, and that we have the only Muslim mayor of all major western cities.”

“But I’m angry about the chasm in this city. I’m furious that we don’t know, and we don’t care to know, about our neighbours.”

“Like most people, I felt saddened and shocked when I saw the images of Grenfell Tower on fire. My anger was soon turned into helplessness and hopelessness. How could this happen? How could we allow dozens of innocent people to die because of the greed and carelessness of a few people?”

Great work, and a great cause, I’m sure everyone will agree. And also really nice to see some new stuff from Ben Eine, although I guess we all wish it was under different circumstances.