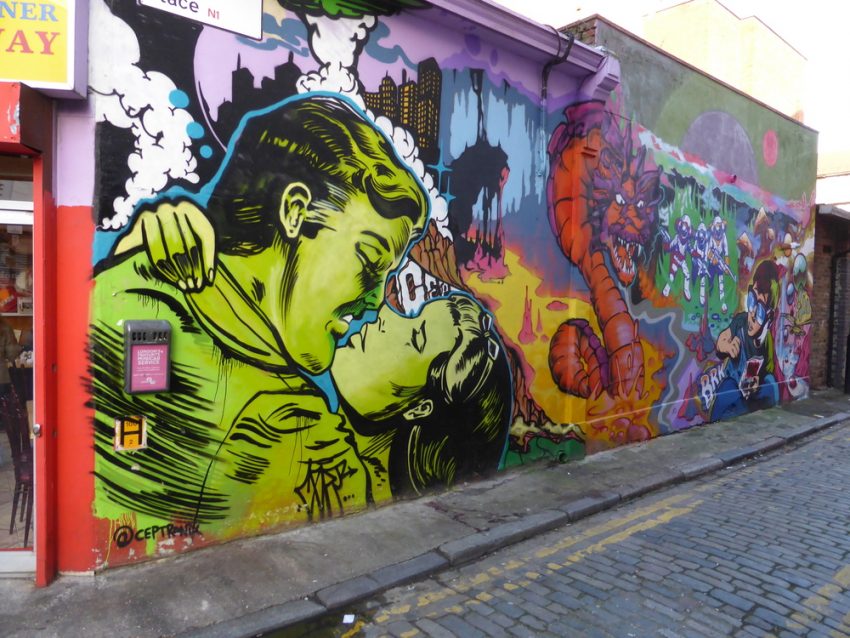 To answer the question whether urban art could be one of the most significant movements in recent art history we must first take a look at the concept of urban art and tackle the question that has been circling in the art community for a long time. What isurbanartexactly?

The question could also be extended and we could also ask ourselves whether urban art is an art movement in a traditional sense? For many years now, urban art has been widely present in contemporary art dictionary, and applied loosely to signify many distinct phenomena. It is often interchangeably used with street art and to some extent graffiti and it adds to the confusion that surrounds these means of artistic expression that have emerged in public spaces in the last decades. Due to attention, cultural recognition and institutional support graffiti/street art/urban art have been gaining in recent times, it is important to talk about the significance of these phenomena in the art world today.

Urban Art – Do We Know What It Is?

Although it is regularly used, urban art is one of those concepts that is particularly hard to define. Most commonly urban art is seen as art that originates from urban environments, it relates to the cities and is created by artists who live in the cities, the matize urban lifestyle and consider cities their working environment. If we accept this definition then we have to wonder how is urban art different from street art and why is there so much fuss about the correct use of the term? On the other hand, urban art is used to describe the works that are not made on the streets, but in studios by those artists who come from street art and graffiti background. In relation to this notion, we may ask ourselves how does urban art correlate to contemporary visual art practices.

When I first started writing about street and urban art the distinction between these two terms often reminded me of another popular, yet debatable differentiation. The one considering comic books and graphic novels. Surely, there are some differences between the two, but ultimately graphic novels are just a fanciest word to describe more familiar phenomena and market the form of comic books to a different kind of audience. Can the same be said for urban art? Is the name just a commercial strategy to bring the works of those artists who prefer to work in public spaces to the high-end art market and make street art a commodity? Or is it something more?

What Defines an Art Movement?

If we leave all the problematic distinctions aside and decide to look at urban art as a movement in its own right, we will again find ourselves on shaky ground. At the beginning of the twentieth century, the formation of art movements was particularly important in modern art and avant-garde. Art movements can be described as tendencies or styles with a distinct common philosophy or goal followed by a group of artists for a limited period of time. If we apply this notion to urban art, we might not be able to see it as a movement in this traditional sense.

Urban art is a paradigm of hybridity, a quality so common in our postmodern or post-postmodern world. With so many artists working in various styles and tendencies that range from graffiti to photography, street performances, and large commission murals it is hard to find the common ground and visual characteristics that can define the movement. However, there are some contextual elements that unite all these diverse phenomena and are responsible for making urban art a movement in its own right.

Graffiti and street art emerged as rebellious practices connected to subculture lifestyles, hostile toward art institutions, with anti-capitalist, social and political undertones. The birth of urban art was strongly dependent on the communities and local reception. It originated on a neighborhood level, addressing local issues and communicating messages in-situ. However, in the last fifteen years, things changed immensely and this ephemeral and local phenomenon became a global movement due to the obsessive documentation of street artworks and online photo sharing.

Fueled by the Internet, urban art gained visibility on a global scale and it allowedartists to track each other’s work, establish connections and collaborations, form a scene and a base of followers. The growing visibility was followed by the crossover into gallery system and consequently high-end art market where it became one of the leading forces. Urban art like no other movement in recent art history gained praise and recognition everywhere and the most intriguing thing about it is that it was equally appreciated by the large art loving audience, elite collectors, and art professionals. It is a puzzling fact that becomes so much clearer if we take a look at the wider context of contemporary art in the last fifteen or twenty years.

For the last two decades, if not even longer, contemporary art has been trapped in the vicious circle of pastiches and appropriations. The art world was full of neo-somethings, post-isms, and meta-artistic phenomena. Conceptual art, minimalism, the revival of the abstract, all these movements were more concerned with conditions of their own existence, self-referential and approachable only through art theory. Contemporary art spoke only to a limited circle of educated people and even they were getting tired of its senselessness.

Urban art, purposely ignorant of academic discourse and theory, immersed into everyday reality which contemporary artists ignored, naturally became movement attractive to many. Also, it was the only movement that emerged in the last 15 years or more that wasn’t just a revival of some other historic art traditions. Furthermore, the aesthetic diversity of urban art practitioners was welcomed in the art world dominated by monochromatic canvases and empty spaces.

Urban art was new, exciting, subversive, bold and highly democratic because of its rootedness in public, communal spaces. The social, political aspects and critical connotations were also widely praised among those who got annoyed by the fact that contemporary art has lost its sense of the social surroundings.