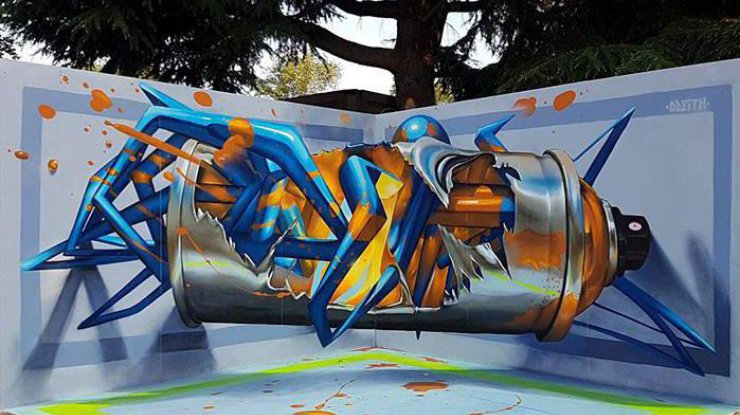 Following in the wake of this year’s hugely successful Nuart Aberdeen, Zap Graffiti were throwing their maiden festival, Contrast Mural Festival, in Liverpool.

One week after the likes of Bordalo II, Hyuro, Phlegm and Snik ventured to the north east of Scotland,  miles away on the west coast, Contrast welcomed it’s own equally impressive line up.

Huge talents including London’s Mr Cenz, Darren John and Akse P19 were on the bill, and there were some familiar names from closer to home too. Elph and Trench representing Edinburgh were also set to paint some great spots in Merseyside.

With such a diverse field, the genre spanning output has been really impressive to catch online. With that in mind, I’ve picked six of the best pieces that have surfaced for you to check out.

Danish artist Frida Stiil Vium took over a spot that had previously been home to an older piece from Cranio.

Her impressive, colourful creation spanned the outside walls of the event venue Constellations becoming one of the most impressive pieces painted across the week long festival.

Close by at the same venue, Aches took on a smaller wall to produce this insanely realistic portrait. His use of colour is outstanding, and the addition of the giant red marker line sets this piece off.

Set aside some time to explore more of Aches art – if you think this piece is impressive, wait until you see his lettering.

The Danes were in strong form at Contrast, Cmp One delivering another standout wall from the festival.

His atmospheric artwork in sepia tones almost always contains three key ingredients, a New York style cityscape, a metro train and a figure with a stereo in tow.

Edinburgh local favourite (whose work has featured many times on UKB) and TEAone held down the space at Santa Chupitos on Slater Street alongside compatriot Trenchone – more on his piece shortly.

Great to see both of these artists collaborating, their meeting of styles is an interesting one. Elph’s detailed and delicate Japanese culture inspired characters and scenes, often filled in with watered down shades sitting alongside TEAone’s abstract lettering with hard lines and bright palette is an effective combination.

Another of my favourite Edinburgh based artists, Trenchone’s signature bones and colour scheme were uncovered on the same complex.

Trench’s time painting alongside Elph and TEAone, now presumably makes Santa Chupitos the must-visit cocktail bar for street art followers in Liverpool – even if you don’t really like cocktails…

The graphic designer who likes to paint on walls brought his minimal, clean designs to life in Liverpool and rounds off my top six unmissable Contrast pieces – this one is to be found on the Strand.

The festival produced so much work that in truth, picking six means that many more excellent works haven’t been featured here.