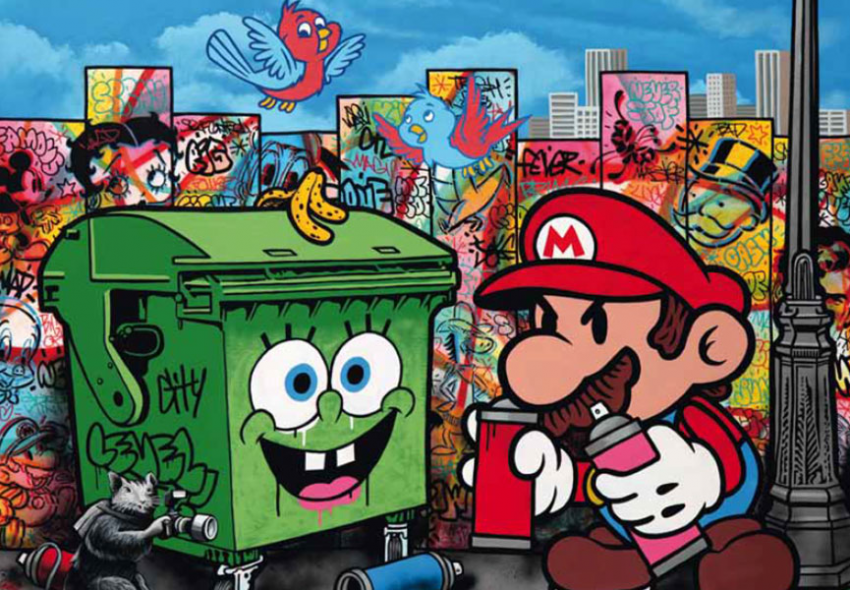 Miami Art Week kicks off today and thousands of art lovers and curious visitors will descend on Wynwood to take in its colorful walls, trendy galleries and scores of selfie spots. The arts district is thriving like never before.  But in the late ’90s, the neighborhood was mainly composed of a string of dilapidated warehouses, auto shops and drug dens.

It “was a bit sketchy then,” said Ron English, a revered Texas graffiti artist who has worked at Wynwood Walls. “I saw this guy hanging out by a trailer and I asked him if I could paint his trailer. He said I could and I did, only to later find out it was not his. I guess the crack he was smoking at the time should have been a clue.”

However, because of street art and the work of property developers such as David Lombardi and Tony Goldman, among others, Wynwood has transformed into a popular tourist destination. With more restaurants and businesses moving in, the public art space now sees over 150,000 sightseers monthly. During Miami Art Week, those numbers swell with a proliferation of shows and parties in the arts district and nearby in Midtown Miami.

Lombardi visited Wynwood for the first time with a friend to view a 5,000-square-foot warehouse advertised cheaply in the Miami Herald. Never having been west of North Miami Avenue, Lombardi cautiously entered the 24-foot tall warehouse filled with skylights, the ground littered with greasy old boilers.

“The streets back then, a lot of the lights didn’t work,” Lombardi said. “There were a lot of automobile repair shops; a lot of mean dogs behind fences. It was not the Wynwood you see today.”

But Lombardi saw potential. He had previously bought real estate in South Beach, but found it was dificult to find properties with good value. His friend bought the warehouse, citing the extremely low price as reason enough.

“I went home and thought about what he said, and how fast we got there from my house on Miami Beach,” Lombardi said. “I came back over on Monday and started serpentining the street. I came to a few quick conclusions.”

Lombardi discovered that I-95 was located just a few minutes from Wynwood. He timed the travel to downtown and South Beach, just 5 and 7 minutes respectively. Lombardi started buying warehouse space in the area on a leap of faith, basing his judgments on the location and price.

After Lombardi had bought a number of properties in Wynwood, he began to think of ways to create more value, including driving more foot traffic to the developing streets. He started Roving Fridays, a walk through the neighborhood for art admirers who wanted to see the budding scene. These strolls through the neighborhood would later lead to the Art Walks, which now happen on the second Saturday of every month.

“It was a way for me to advertise any empty space I had at the moment to try to lure a tenant, and simultaneously to get people to see the vision I had for the neighborhood,” Lombardi said. “We would let 25 young artists hang their artwork in the space. It became a happening. The growth was exponential. It became something people would look forward to.”

Lombardi’s walks were inspired by parties he attended at Objex Art Space, a, now-defunct, intimate second-story space. At these parties, artists would display their work, discuss art trends, drink cocktails and listen to live music. The contrast between the class of these events and the decrepit nature of the surrounding industrial infrastructure surprised Lombardi. He thought, Why hasn’t the inner beauty of these buildings spread to the facades?

“It always bothered me that we had non-descript facades with cherry filling, but now we were able to put the cherry on the outside,” Lombardi said.

Through meeting with local street artist collective Primary Flight, Lombardi discovered a crucial opportunity to coordinate the inner and outer beauty of Wynwood.

“The idea was brought to me by Books [Bischof] and Typoe,” Lombardi said. “They had connections to artists all over the world, and they started descending here during Art Basel. I would give them whatever walls I had available.”

The street art movement started to gain traction once Art Basel came to South Beach in 2002; it brought waves of international artists and art lovers through the city. It took a couple years for the attendees not tapped into the underground art scene to realize the productions taking place on the streets of Wynwood. Bischof, Typoe and Cristina Gonzalez founded Primary Flight, a collective of muralists, with no mission in mind other than getting their personal messages out to the public, mimicking the style of the giant advertising billboards alongside I-95. They recruited attendees of Art Basel to join the movement in Wynwood.

“The attitude was that [the streets] always belonged to us to begin with,” Bischof said. “‘They are always delivering their messages to us, so why not utilize the same method to speak more to the people there … We had a press release in 2007 that was like: no wine, no cheese, no events. There was no money to be made. We were doing it because it was a necessity. Necessity is the mother of invention. Our galleries were not putting us on at the most important time of the year, so we took to the streets. That was the birth of the street art, graffiti, mural movement in Wynwood Arts District, period.”

Art Basel saw an exponential increase in street artist traffic before hitting a “critical mass,” according to Bischof. One of the hundreds of artists who worked with Primary Flight during this period goes by the name HOX, and is part of the local Miami Style Gods (MSG) crew.

“It was honestly the most exciting thing: unbelievable amount of networking and people from all around the world,” HOX said. “The reality was we invited a couple hundred artists, vandals, f—ing thieves. The best and the worst of all kinds of characters. The city, nobody, knew how to deal with this kind of situation; it was magical. Twenty to 30 city blocks transformed in a matter of weeks. From the beautiful to the ugly, it was extremely overwhelming. It was mayhem; some people went to jail; some people didn’t get caught. It was chaos embraced.”

Gonzalez believes there is a method to the madness; street art offers opportunities and perspectives that galleries simply cannot.

“There is something to be said about people enjoying art outside of white walls or in a gallery,” said Gonzalez. “You don’t have to pay to see it. You don’t have to be a fancy art collector. You could be anyone … What we were doing in the street, took on its own life.”

By 2009, Tony Goldman, known for his development work in South Beach, had bought many properties in the area. He created a huge piece of Wynwood history: the Wynwood Walls, one of the world’s largest permanent outdoor mural exhibits on NW Second Avenue at 26th Street. Goldman, like Lombardi, bought property in the area because he saw potential within the bare-boned structure.

“I saw the architectural aura of the neighborhood,” Goldman said in an interview with the National Trust for Historic Preservation in 2010. “The cast-iron district expressed a powerful sense of place that didn’t exist, that doesn’t exist, in many places in the world. But it was the historic fabric, first and foremost, that captivated my attention and interest.”

Goldman passed away in 2012, but his daughter Jessica Goldman Srebnick has continued his work in the Wynwood Community.

“My dad was an enormous influence on my life,” Goldman Srebnick said in an interview with CBS Miami. “I like to think I don’t follow in his footsteps. I create my own footsteps but he has created a path for me.”

At the Wynwood Walls, Goldman worked to bring established artists such as Shepard Fairey, Kenny Scharf and Ron English to paint large-scale works to drive tourism to the area.

“The Wynwood Walls area is like nowhere else in the world,” Scharf said. “It shows how any ugly urban scape can be transformed. The accessibility of art in the street can be a powerful message to communities about creativity and inspiration and has the power to uplift … I was always impressed with how unassuming [Goldman] was, although he did have a wild wardrobe.”

Graffiti writers Crook and Quake have a unique perspective on Wynwood’s growing popularity. The two artists were also a part of the MSG crew during the 1990s, painting all over Miami before Lombardi had even taken his first tour of Wynwood. Artists did not have the protection or support of local business owners, so the lifespan of graffiti in the area was often short.

“Everything was ephemeral,” Quake said. “I love the fact that walls come down. I hate it when my own walls come down, but I respect it. That is where graffiti is different from gallery art and canvas stuff. Whatever happens, happens. Some of the most beautiful pieces we ever painted at night were gone the next morning, never to be photographed.”

Back then, artists put their freedom on the line to express whatever message they felt the public needed to hear.

“Does that make it more valuable? I do not know; I do not even know if it was seen, but it makes the experience more pure. You cannot find a more pure art form,” Quake said. “People go out, risk their freedom, know it’s possible no one ever sees it and work on a wall 10 feet high and 20 to 30 feet wide. It might not even be up for a few hours.”

Crook was once a name synonymous with street art and graffiti in Miami.

“The star now is Wynwood and Art Basel, not a writer or a crew or a gallery,” Crook said. “Wynwood is an ever-changing canvas. Some things last; some don’t. People don’t go there to see any one person; they go to see it all.”

That “all” now includes a growing reputation as a home for Miami startups too. The 3-year-old LAB Miami co-working space on 26th Street NW often serves as the center for events in the burgeoning local tech community. Nearby, the software company Live Ninja has hosted a weekly morning meetup called Waffle Wednesday since 2014, bringing together entrepreneurs, artists, techies and others for networking over breakfast to take advantage of Wynwood’s creative energy.

Crook now operates a creative design business with Quake and sees changing attitudes toward street art as part of a natural evolution.